The day the world sang for peace

24 October 2021 marks the 50th anniversary of the premiere of the Hymn to the United Nations, composed by Pablo Casals and with words by W. H. Auden. The event was held at the headquarters of the General Assembly in New York and on that very same day Casals received the United Nations Peace Medal from Secretary-General U Thant in recognition of his career and life commitment to peace, democracy and freedom. His improvised, emotional speech of gratitude became a historic moment of reference.

Casals defended peace as a number-one goal. He compared music, which expressed the good and best of humanity, with war, which for him was the worst.

Pablo Casals enjoyed an extremely long, intense relationship with the United Nations. After the Second World War, his silence was a form of protest against the Allies for supporting General Franco’s dictatorship. And he fought for peace and democracy until the end of his life against this backdrop of the Cold War and nuclear threat. Pablo Casals was invited to play on three occasions: in 1958, 1963 and 1971, and his three speeches are a magnificent expression of the thought and sensitivity of this universal Catalan. The 50th anniversary of Pablo Casals’ speech at the United Nations has been declared an “official commemoration of 2021” by the Government of Catalonia.

A message of peace to the world

During the summer of 1958, Pablo Casals added his voice together with that of the legendary Albert Schweitzer in a manifesto calling on the Russian and American leaders to halt the arms race and nuclear testing.

Shortly afterwards, he was invited by Secretary-General Dag Hammarskjöld to perform in a concert commemorating the 13th Anniversary of the United Nations in New York. Casals, who maintained his protest of not playing in Allied countries because of the continuation of Franco’s dictatorship in Spain, accepted the invitation because the headquarters of the United Nations was considered neutral international ground. Casals had not played in the United States for thirty years. Despite the problems and obstacles that arose in its path, this international forum represented the greatest hope for laying the foundations for peace and understanding among nations. Casals did not miss this opportunity to use his music and cello to bring his message of peace to the world.

Accompanied by his pianist friend Mieczysław Horszowski, he performed Sonata for Cello and Piano No. 2 in D Major by J. S. Bach. The programme also included Symphony No. 5 by Honegger and Symphony No. 4 by Brahms, performed by the Boston Symphony Orchestra.

The concert, along with a message from Pablo Casals, was broadcast on seventy-five stations across five continents and CBS televised it, thereby converting him into a symbol for world peace.

The most powerful nations have a duty and responsibility to keep the peace. It is my deep conviction that the great masses in these countries want the understanding and mutual cooperation of their fellow men. It is for the governments and those in power to see to it that the achievement of this desire will not become impossible. The United Nations today represents the most important hope for peace. Let us give it all the power to act for our benefit.

See the programme Read his speech Listen to his speech 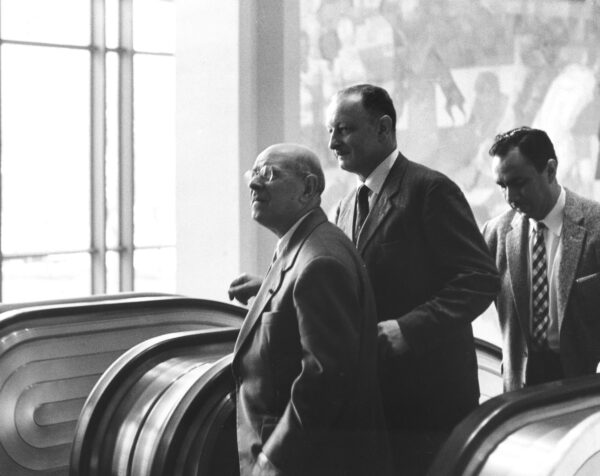 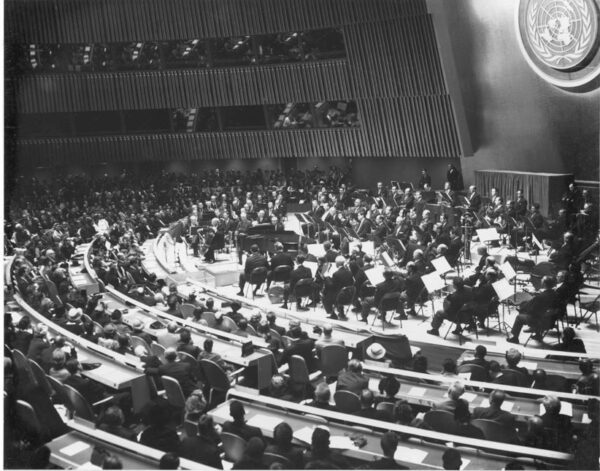 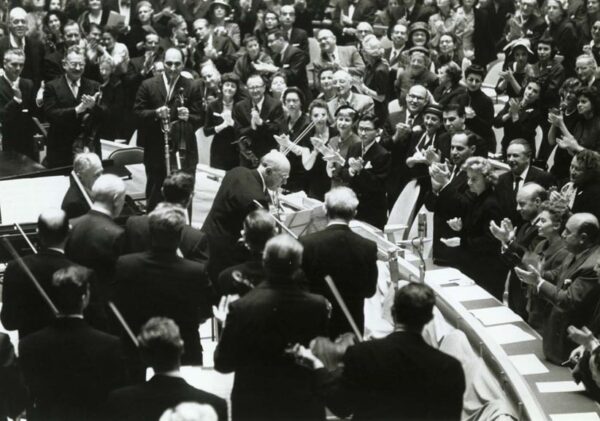 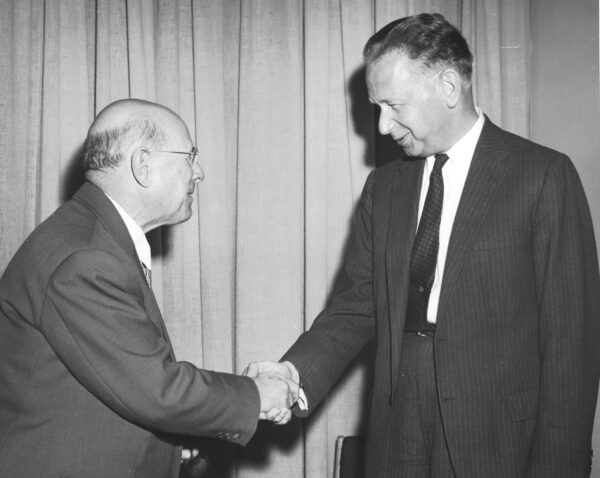 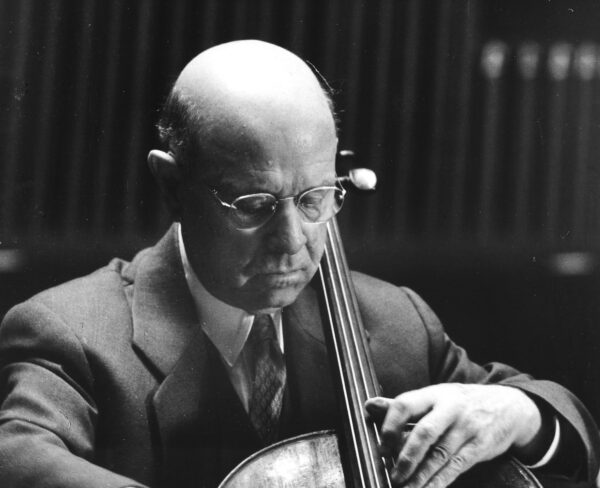 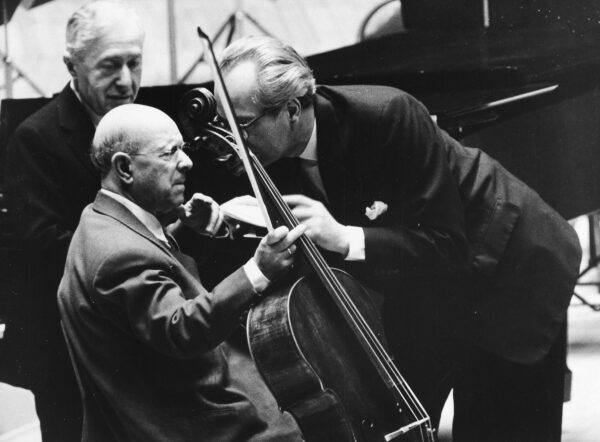 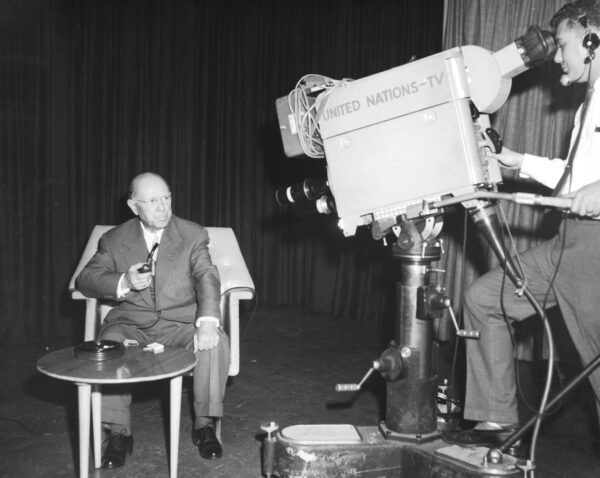 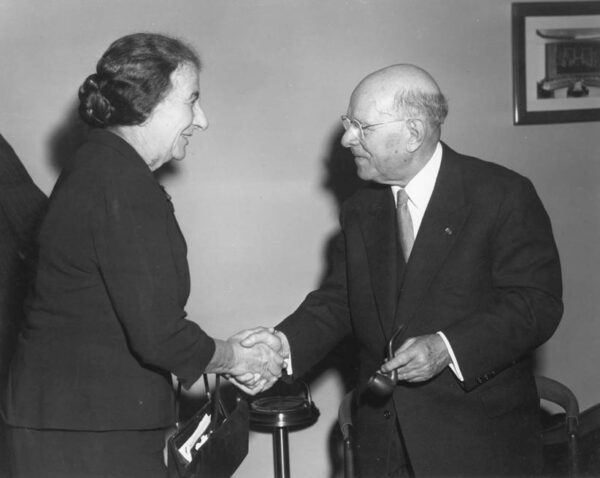 The second time Pablo Casals went to the United Nations was in 1963, when the then Secretary-General of the United Nations, U Thant, invited him to its New York headquarters to conduct his oratorio El Pessebre (The Manger) with the Casals Festival Orchestra and Cleveland Orchestra Choir. Secretary-General U-Thant described him as “a musical giant of this century” and “a renowned figure throughout the world as a champion of peace and human rights”.

El Pessebre (The Manger) was premiered in December 1960 in Acapulco, Mexico, in gratitude to the country for welcoming Spanish exiles. Two years later, in 1962 in San Francisco, Casals announced his Peace Crusade, which would take him to conduct his oratorio throughout the world. Music was his only weapon and he had decided that all financial profits would go to a fund created to promote those causes that defended human dignity, brotherhood among men and world peace.

The programme included Pablo Casals’ message of peace, in which he called for the union and brotherhood of all peoples.

Music, that wonderful universal language, should be a source of communication among men. I once again exhort my fellow musicians throughout the world to put the purity of their art at the service of mankind in order to unite people in fraternal ties. With this objective in mind, I consider it my duty to offer my humble contribution in the form of a personal crusade. Let each of us contribute as one can until this ideal is attained in all its glory; and let us unify our fervent prayers that in the near future all humanity may be joined in a spiritual embrace.

See the programme Read his speech 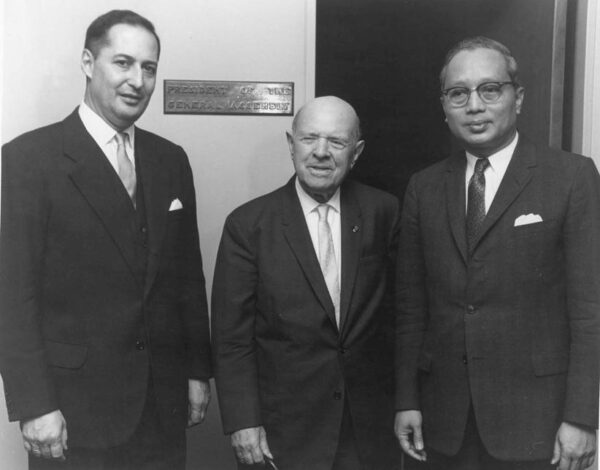 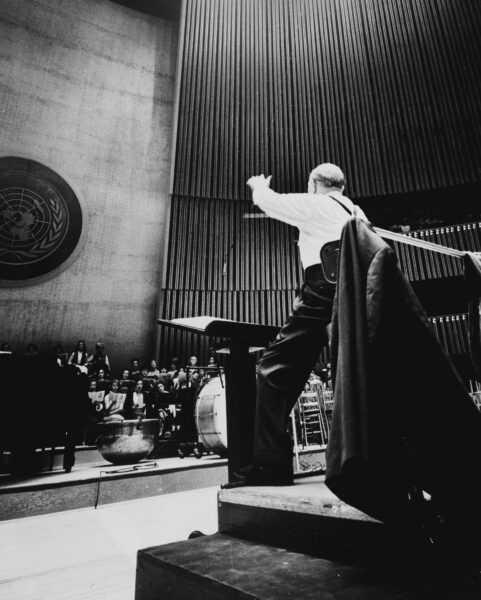 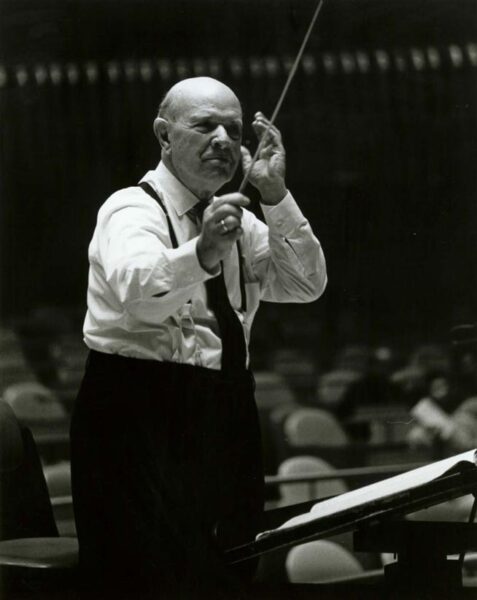 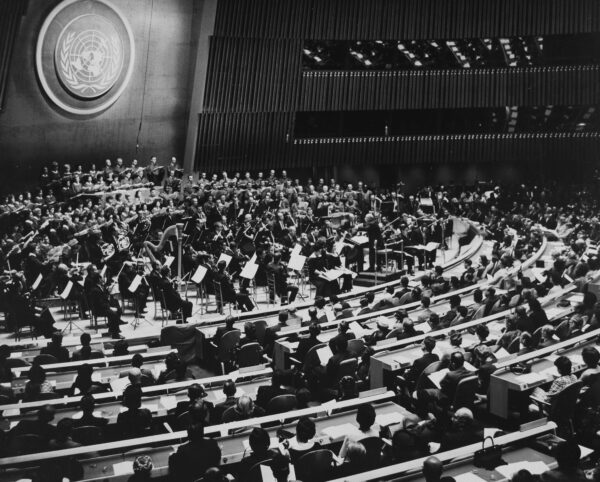 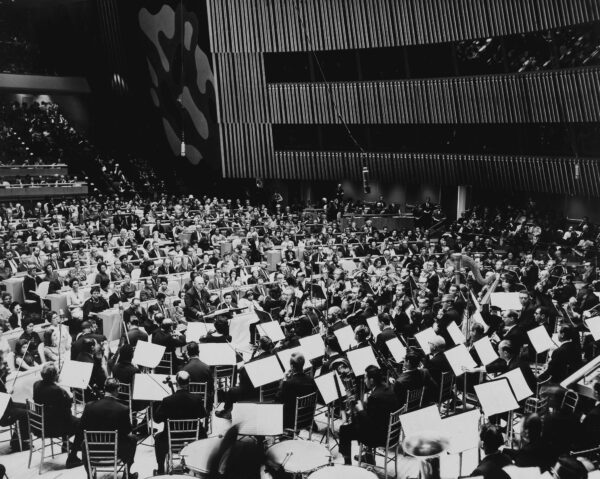 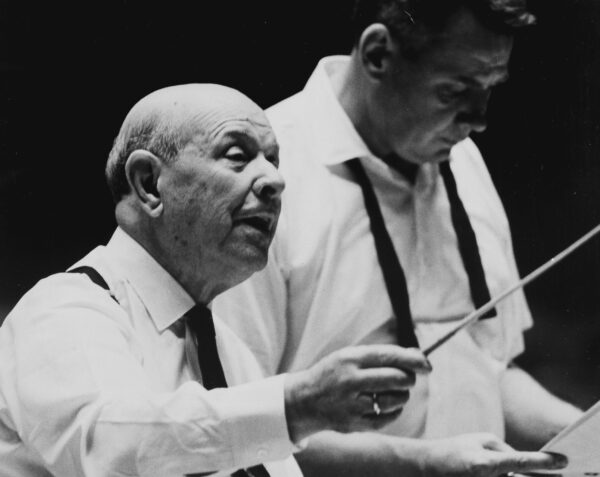 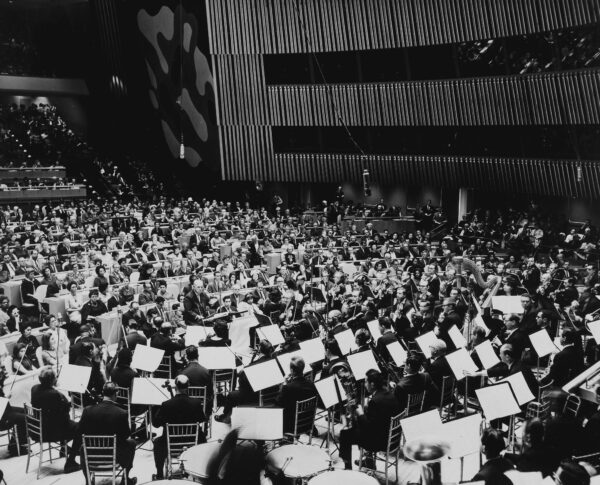 Hymn to the United Nations

In 1970, Secretary-General U-Thant wrote to Casals and asked him to compose an anthem for the United Nations based on the words in the Preamble to the Charter of the United Nations. Casals accepted the commission, but faced with the difficulty of the text he suggested that the poet W. H. Auden write a new text for the occasion. The work, written for choir and orchestra without soloists, was entitled Hymn to the United Nations and it premiered at the headquarters of the General Assembly in New York on 24 October 1971, with the participation of the Choir of the Manhattan School of Music, the Singers of the United Nations and the Casals Festival Orchestra under the direction of Pablo Casals.

Casals received the United Nations Peace Medal on that very same day. U Thant presented it to him with the following words:

You have devoted your life to truth, to beauty and to peace. Both as a man and as an artist you embody the ideals symbolised by the United Nations Peace Medal.

In response to this unexpected distinction, Casals was moved and overwhelmed by the honour he had just received and he delivered one of his most emotional and unforgettable speeches for peace and his homeland, Catalonia, away from which he had been living in exile for more than thirty-two years.

I am very moved… This is the greatest honour I have ever received. Peace has always been my greatest concern. I learnt to love it when I was but a child. When I was a boy, my mother – an exceptional, marvellous woman – would talk to me about peace, because at that time there were many wars. That is why everything that comes from the United Nations goes straight to my heart and I follow closely everything that the United Nations does.

During the same concert, Casals conducted the Concerto for Two Violins in D Minor by J.S. Bach, with the violinists Isaac Stern and Alexander Schneider, as well as the Concerto for Three Keyboards in C Major by J. S. Bach, with the pianists Mieczysław Horszowski, Rudolf Serkin and Eugene Istomin.
After an hour and a half of concert and in a totally improvised manner, Pablo Casals played before the entire chamber  El Cant dels Ocells (The Song of the Birds), as a song of hope and peace. 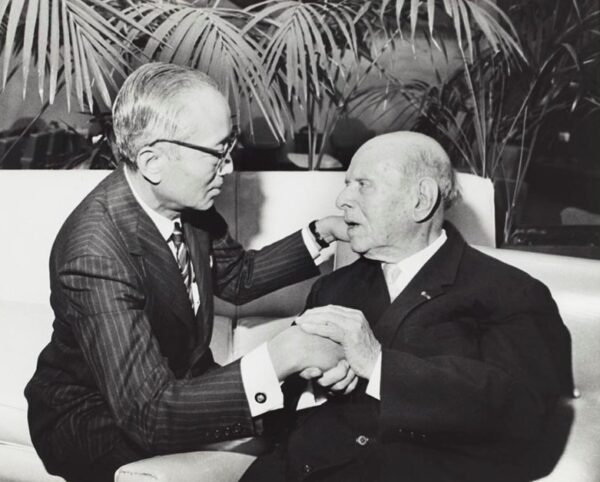 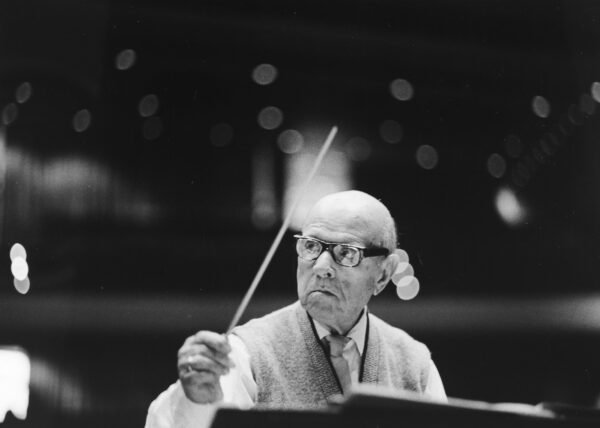 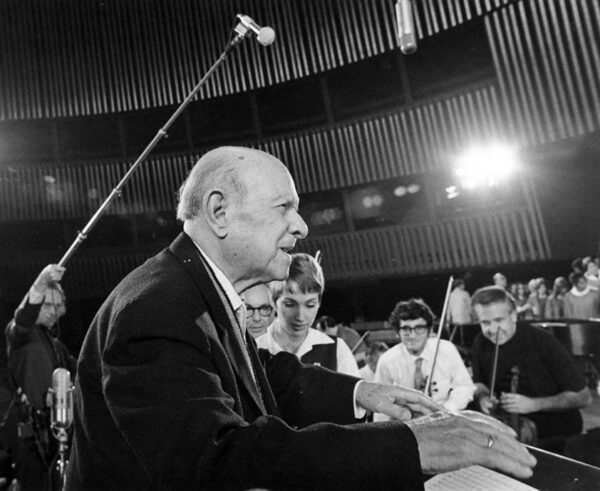 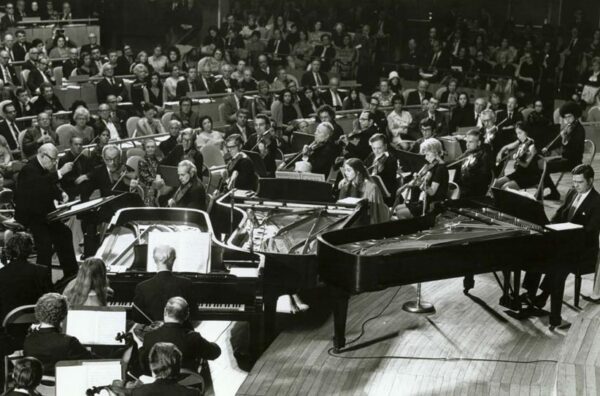 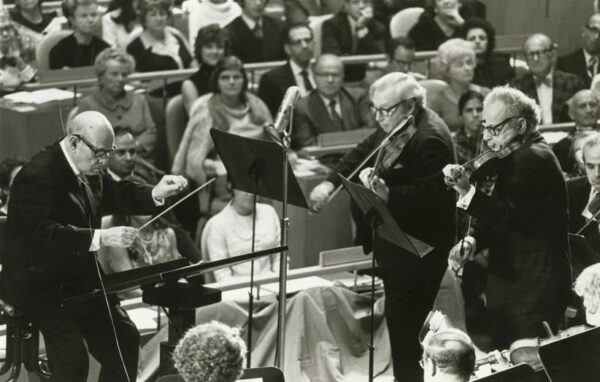 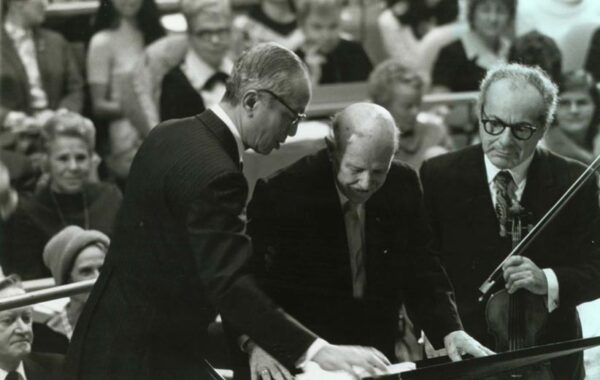 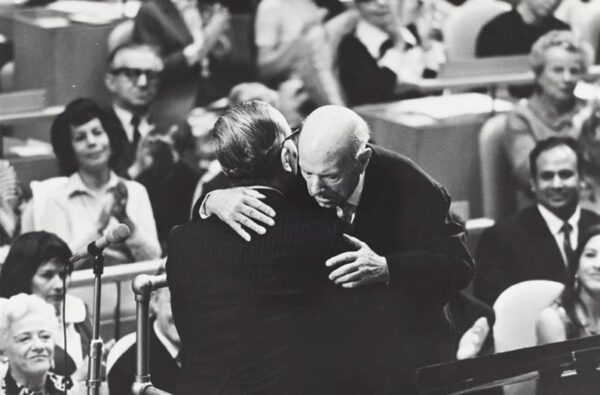 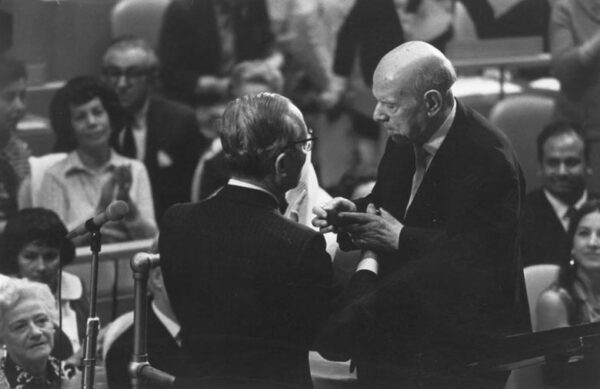 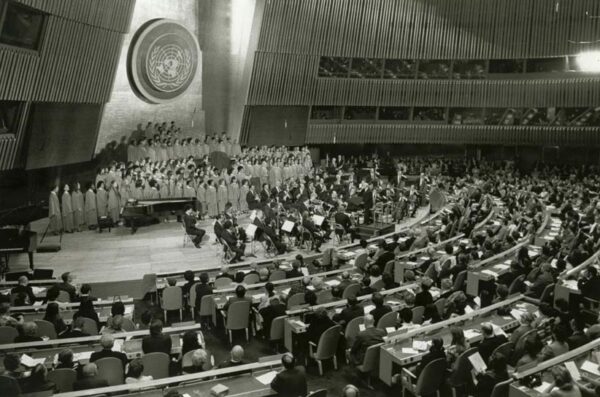 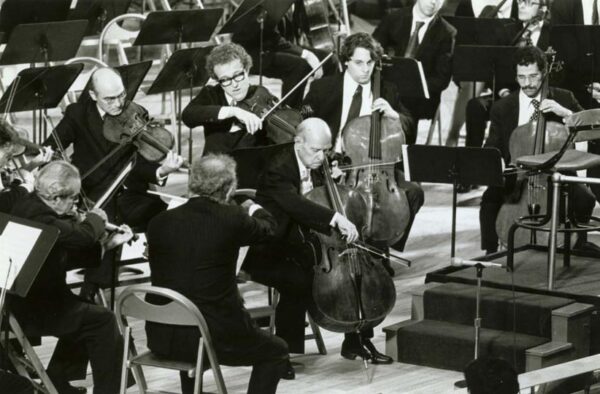 Pablo Casals’ relationship with the United Nations extends beyond the three occasions that he was invited to play. In 1970 the “Salud Casals” charity concert was held at New York’s Lincoln Center in aid of the American Symphony Orchestra’s youth programme. Casals conducted 100 cellists in a performance of his Sardana per a orquestra de violoncels. Two days later, on 17 April, a reception was held in the Hall of the United Nations, hosted by Secretary-General U Thant. On that day, Casals recorded a message calling for better conditions for children and addressing the new generations, which can be watched here.

In 1973 Casals made his last visit to the United Nations. It was a reception with Secretary-General Kurt Waldheim. Casals was in New York for the Casals Festival concerts held at Carnegie Hall.

In 1977, four years after Pablo Casals’ death, the United Nations dedicated a bronze bust to him. The sculpture is a Robert Berks piece, and to this day it is still on display in the hall of the headquarters of the General Assembly in New York. 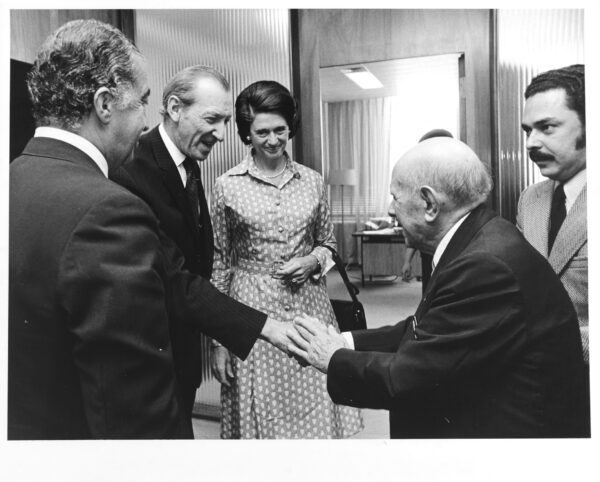 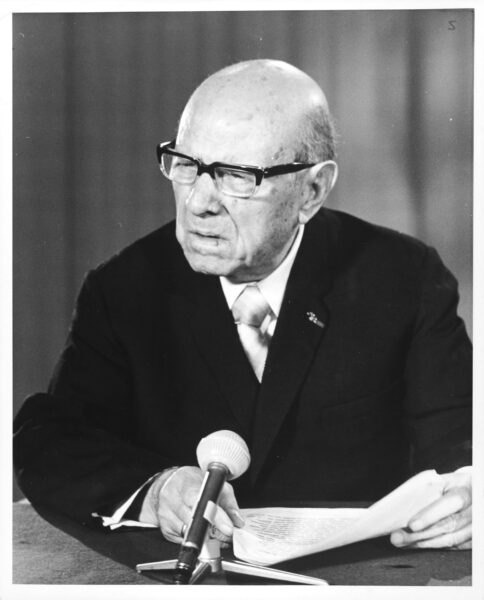 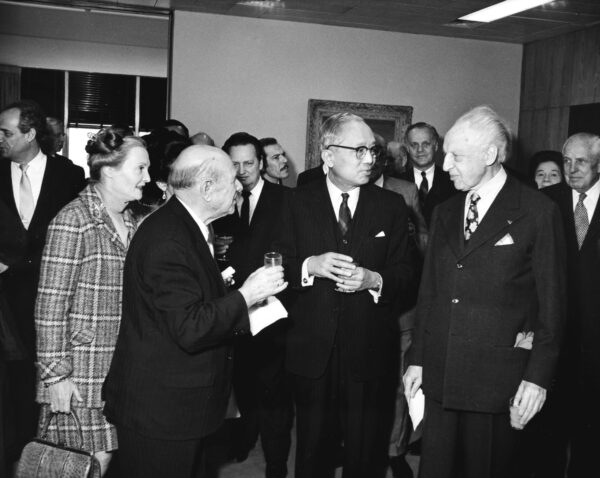 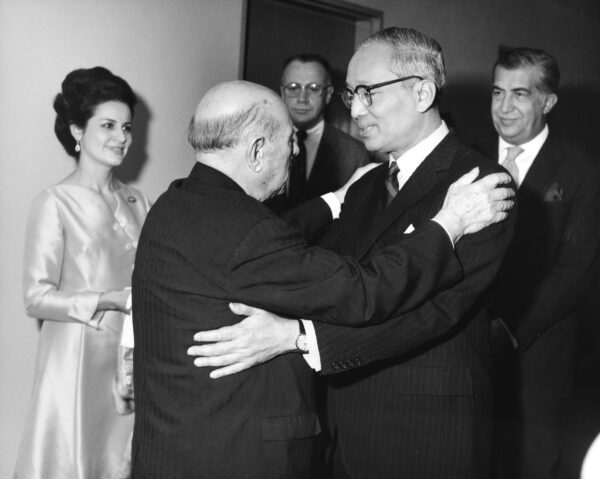 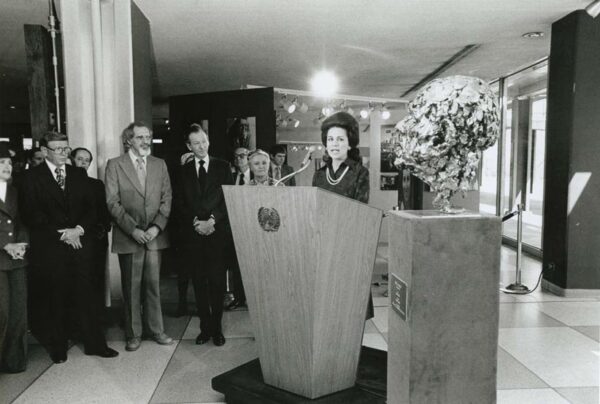